Have you ever felt completely at home in a new place, even though you’ve actually just stepped in the door?

It’s a magical feeling isn’t it?

And I don’t know about you, but for me, it doesn’t happen often!

When I started my undergrad in vocal performance at LA Tech, I knew immediately when I stepped into the music building on campus that I had found my new home.

He was also one of only two people in this world who could get away with calling me Fronzie.***

***Unless you want to be on the receiving end of my signature glare, 🔥do not try this!

Where would we be without our teachers? ✏️

They create the magical spaces where we not only learn, but form lifelong friendships.

So when I heard that Mr. Wylie passed away, it hit me hard.

It got me reminiscing, reconnecting with friends from the shows we performed in under his direction and vocalists I sang recitals and duets with during our time as his students.

I used some of the pictures from our time together to craft a tribute to this wonderful man and the musical memories he helped us create using a recording of one such duet, the song “Only Make Believe” from the musical Showboat.

I hope this inspires you to reach out to someone who impacted you and let them know. ❤️

♫ Only make believe I love you….for the tell the truth….I do ♬

Want more of these inspirational messages and music delivered to you? Input your best email address and never miss an update!

Success! Now check your email to confirm your subscription. 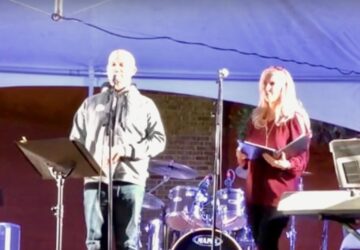 Have you ever asked God why?  Why didn’t you save me? Why haven’t you fixed them? Why can’t you make them love […]

Living near New Orleans, I’m very familiar with Mardi Gras parades. So when a friend asked me if I’d eaten pancakes on Fat Tuesday I was puzzled.

Let’s see how inventive we can be in encouraging love and helping out, spurring each other on toward love and good deeds.  […]